Microsoft, Cisco, Electrolux, General Electric, Intel, Qualcomm, Samsung, ARRIS, and CableLabs in a joint press release say they will work together to create specifications and protocols to ensure devices from a myriad of manufacturers work in harmony.

Accredent has been successful partnering with business leaders of corporations and emerging ventures to develop and transform their businesses, accelerate revenue, growth and enterprise value through the Internet of Things. accredent.com
Posted by Accredent at 10:33 AM 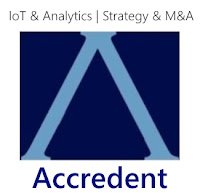 Automation World’s David Greenfield penned an article about research from the Industrial Internet Consortium that points to how IoT is “turning the venture capital model upside down.” In part Greenfield writes: Last year, the Industrial Internet Consortium’s Thought Leadership Task Group commissioned a project with New England Partners to find out “what was changing, how companies…
Read More

IoT based on the mobile cloud growing fast.

Todd Hixton's Forbes article observes that a new wave of IoT companies have recently emerged, focusing on applications. Nest, Revolv, and SmartThings are examples; they have now been purchased by Google and Samsung. The market size is growing, but is still not huge, e.g., the biggest of these companies, Nest, was on track for $300 million of revenue when acquired in 2014...
Read More

The big data gold rush: Will Wall Street be left behind?

Debra Walton in her article for Thompson Reuters asks, "Amid all the excitement about big data, are financial firms taking the right approach to it?" It’s easy to be enthralled by the hype, but hard to turn big data into an integral part of the corporate strategy. Like gold miners, the challenge for Wall Street will be getting real nuggets, not fool’s gold, silt, and pebbles...
Read More

Cypress announced a $550 million acquisition of Broadcom. The Broadcom division employs about 430 workers and generated $189 million in sales over the past year, Cypress said. T.J. Rodgers, one of the most prominent leaders of the microchip industry, plans to step down as chief executive of Cypress after nearly 34 years running the company he founded. Cypress shares rose 6% following the announcements.
Read More

On March 9, 2016 KORE Wireless Group, Inc. (“KORE”), the world’s largest managed wireless network services provider specializing in Machine-to-Machine (M2M) communications and the Internet of Things (IoT), today announced the acquisition, in an all-cash transaction, of Wyless Group Holdings (“Wyless”). Following the completion of this transaction, the combined company will be supported by a staff of more than 350 team members, maintain a customer base of more than 3,000 B2B companies globally and serve in excess of six million subscribers on behalf of those customers. The organization will instantly rise to become one of the six largest providers of M2M/IoT services globally, inclusive of carriers...
Read More

On February 3, 2016 Cisco (NASDAQ:CSCO) announced its intent to acquire Jasper Technologies, Inc., a privately held company based in Santa Clara that delivers a cloud-based IoT service platform to help enterprises and service providers launch, manage and monetize IoT services on a global scale. Under the terms of the agreement, Cisco will pay $1.4 billion in cash and assumed equity awards, plus additional retention based incentives...
Read More

On  Feb 1, 2016  (NASDAQ: CAMP), a leading provider of wireless products, services and solutions, and LoJack Corporation (NASDAQ: LOJN) ("LoJack"), a provider of vehicle theft recovery systems and advanced fleet management solutions, today announced that the companies have entered into a definitive agreement pursuant to which CalAmp will acquire all of the outstanding shares of common stock of LoJack for $6.45 per share in an all cash transaction valued at approximately $134 million...
Read More

Accredent has been successful partnering with business leaders of corporations and emerging ventures to develop and transform their businesses, accelerate revenue, growth and enterprise value through the Internet of Things. accredent.com
Posted by Accredent at 7:34 AM